Photo is a public domain image from the Library of Congress of the Women's League Newport Executive Board. The woman at the top center is Mary H. Dickerson the founder. 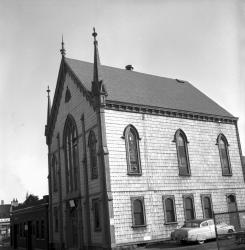 There should be no stock taking account of suffrage progress in Rhode Island in 1913 without mention of the honorable part played by the colored women. Sojourner Truth and Frederick Douglass have been followed by other lovers of freedom throughout the United States. In Mary E. Jackson Rhode Island had its forward and upward looking descendant of worthy forbears. I find in my scrapbook the eleventh conference of the Rhode Island Union of Colored Women’s Clubs, Monday, October 13, 1913, Pond Street Church, Providence, R.I. As one of the speakers I find my own name with the subject “Votes for Women” – Why the Rhode Island Union should endorse the Suffrage movement with open discussion to be led by Bertha Higgins, Providence. The endorsement did take place and, though this statement may be hard to believe, it was the only endorsement received from any large body of women in the State before ratification took place. Our women were timid and fearful of arousing antagonism by introducing a controversial subject into their club business. This action was productive of a series of meetings among the colored women and their support and friendship to the end. Not one of the officers who were serving on this historic occasion should be omitted from the roll of honor:

At this meeting Mrs. Butler Wilson of Boston, gave a soul-stirring address on other forms of freedom desired by colored people as well as white people. The conference was of so high a tone that it called forth the following editorial in the Providence Journal:

RHODE ISLAND COLORED WOMEN
The greater part of the colored people of Rhode Island have a basic social character which springs from the lives and deeds of the members of their race who were here in the days before even the Civil War. The progress and self-helpfulness of all the Rhode Island colored people of to-day (sic) is thus due to an inherited interest in social questions and a racial spirit and pride that give decision and action in the development of the race. This is disclosed anew by the conference of the Rhode Island Union of Colored Women’s Clubs. It shows that strong elements of good are at work in the race here and that the energy of its interest in Rhode Island life has not been sapped by modern things. It is pleasant to see these mothers of another racial group reaching out to give their influence wider scope.

Canvassing, teas, street meetings, Woman’s Journal Day, bazaars and what not, indicate that the day of the parade is not far off, and when it comes it will not be a small one.
Especially good work is being done by our colored people. Miss Helen Thomas, who called together the First Woman Suffrage Party meeting in District 3, has competent captains in Mrs. Phillips and Mrs. Greene, both prominent in philanthropic work among colored people. The Rhode Island Union of Colored Women, representing their race throughout the State, passed a resolution endorsing the suffrage movement and promising support.

This page is related to which committees:
LWVRI - Centennial