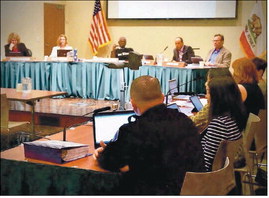 As with most Contra Costa Cities, the election has dominated local events in the City of Lafayette for the past several weeks. There have been some developments in the past week, however.

The City Council considered budget issues on September 30, with an emphasis on the impact of COVID 19 on City finances.

Sales Tax Review. The City’s consultant presented the sales tax revenues for the fiscal year ending June 30, 2020 (FY 19-20), and discussed the revenue impacts of the COVID 19 pandemic. The City receives a portion of sales tax generated by sales within the City.

Although many City residents redirected their retail shopping to on-line vendors, the City of Lafayette does not directly receive its share of those sales tax payments.  Sales taxes collected by on-line vendors are paid to the County and distributed to the cities based on the share of traditional storefront retail sales in a particular community as compared to sales in the County as a whole. This formula results in less money being paid to Lafayette than the City’s share of sales taxes paid by residents.

Budget Update. City staff reviewed the financial results of fiscal year 2019-2020, and presented an update to the FY 20-21 budget.

The Lafayette City Council has been busy.

Planning the next 20 years:

Lafayette is poised to update its city plan - this will shape the next 20 years. See the General Plan Update Intro Video for an overview, and then go to City of Lafayette CA General Plan  to learn more and weigh in!

Monday, August 24, 2020, after another long meeting, the Lafayette City Council voted 4 to 1 to approve the building of the 315-unit apartment building. Vice-Mayor Candell dissented.

City Council has 3 seats up for election in November:

Lafayette is looking to fill three of the five city council seats in November ballot. Four candidates are running: Cam Burks (incumbent), Carl Anduri, Gina Dawson, and Farschad Farzan are on the ballot. Mayor Mike Anderson and Councilmember Steve Bliss are not running. To read about these candidates, see Voter’s Edge.

Lafayette’s housing remains an issue: Lafayette continues its very expensive and protracted housing battle over the Terraces of Lafayette. The Planning Commission held two meetings, hearing from residents in support of and in opposition to the project. After 7 hours, a majority of the Commissioners reluctantly agreed to approve the project, being unable to find legal cause to deny the developer’s permit.

City Councilmember Cam Burks appealed their recommendation. In response, the full City Council will hold a public meeting on August 10, 2020. If you wish to attend the Zoom call, please confirm the start time and details on the LoveLafayette website.

The Brown Act protects the public’s right to attend and engage in meetings of their legislative bodies. It requires timely posting of agendas. Adopted over 50 years ago, it has become the norm, and we have taken for granted our ability to engage in meetings of our city councils and commissions. Then COVID-19 arrived.

Pre-COVID-19, residents were given time during meetings to bring their concerns and appreciations to their officials. The process was transparent and public. Now, faced with health and safety concerns, physical distancing/shelter-in-place orders were issued, and in-person attendance at meetings was suspended for everyone – both officials and the public participate in meetings remotely. This is new territory. There is no time-tested alternative to public meetings. At the most recent Lafayette City Council meeting, conducted remotely, city staff reported on a variety of systems being tried and their efficacy at screening out inappropriate behaviors. It is surprising what people do and say when they are not standing in front of a podium!

To be clear, the City Council of Lafayette has been rigorous in making sure all comments submitted are part of the public record, and they have a staff member present at their meetings to handle the technical pieces. As reported earlier,, their reflexes were tested by the obscene comments made during the first meeting. No other incidents have made it to the public recording since safety protocols were put in place. The city clerk has read comments into the public record, and almost all have been within the 3-minute limit. For many residents, the current method has been a success despite not exactly replicating in person participation.

Some Lafayette residents, however, feel strongly that there is no substitute for an in-person presentation. To address this while balancing the reality of COVID-19 requirements, the City Council engaged in a thorough discussion with council members asking follow-up questions to public comments. Recognizing the urgency to find a solution, the City Council, despite facing a significant reduction in revenues, opted to contract with a virtual meeting management company called PrimeGov to give the public a way to make comments, to screen input to prevent inappropriate comments, and, as closely as possible, to replicate the openness and transparency of pre-COVID-19 meetings.

This article is related to which committees:
LWV Diablo Valley Observer Corps
League to which this content belongs:
Diablo Valley