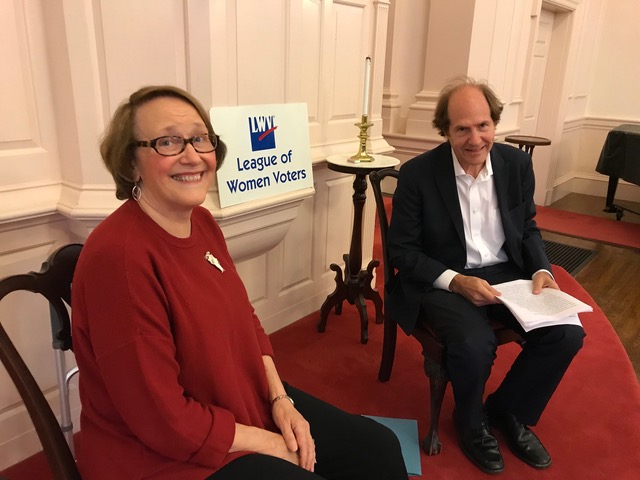 Cass Sunstein spoke to an engaged crowd of over 150 at the Trinitarian Episcopal Church on September 30th. His talk began with these words: “Liberal democracy has enjoyed much better days. Vladimir Putin has entrenched authoritarian rule and is firmly in charge of a resurgent Russia. In global influence, China may have surpassed the United States, and Chinese president Xi Jinping is now empowered to remain in office indefinitely. In light of recent turns toward authoritarianism in Turkey, Poland, Hungary, and the Philippines, there is the widespread talk of a ‘democratic recession.’ In the United States, President Donald Trump may not be sufficiently committed to constitutional principles of democratic government.”

He then focused the audience’s attention on the lives of ordinary people during the rise of Nazism. He noted, “They help explain how people cannot only participate in dreadful things but also stand by quietly and live fairly ordinary days in the midst of them. They offer lessons for people who now live with genuine horrors.”  In focusing on three very different men, who chronicled their experiences in 1930’s Germany—Milton Mayer’s who wrote They Thought They Were Free; Sebastian Haffner’s devastating, unfinished 1939 memoir, Defying Hitler; and Konrad Jarausch’s Broken Lives—Cass reminded us how easy it is to be lulled into complacency and excuses when living through challenging times.

The massacre in Pittsburgh in late October, that made evident the consequences of hate speech, objectification, and division poignantly clear, brought Professor Sunstein’s talk into vivid relief. May we heed his words and remain an organization that is not quiescent in difficult times.