You can make a difference in our communities by getting involved professionally or as a volunteer! Check it out!

League of Women Voters of Pennsylvania is hiring an Executive Director. The job description and requirements are posted on the website.

LWVLA's IT Tech Team is searching for someone to monitor and manage our blog space. This collection of blogs was developed in WordPress - a relatively simple system to use. Check it out!

"How to Run for Public Office" Workshop 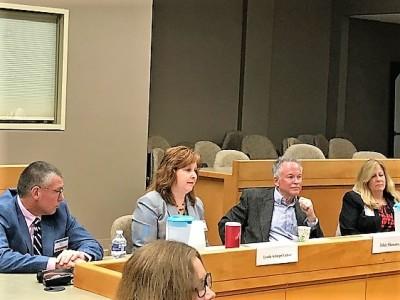 It Takes a League to Build a Workshop.

The panelists were Republicans and Democrats. They were from Snyder, Union, Northumberland, Centre, Perry, and Montour counties. They were men and women. They were from federal, state, and local levels of government. There were long-term public office holders, and people who participated in their first campaign.

Three of the sessions were devoted to ideas and suggestions for getting started on a run for public office. A fourth session, led by election board officials from Union and Snyder counties, covered the legal procedures and requirements for candidates. And a fifth session was on coalition building during which the registrants could talk with political party representatives.

Updated materials from the workshop are relevant for people considering a run for office.

This November, 2017 program was part of a 4-part educational series titled 'Hallmark of Democracy' and concentrated on the judicial system. It featured a presentation on our system of checks and balances among the three branches of government. It also explained the important role of the courts and the workings of our local and state courts, how the federal courts work, and the role of the Supreme Court of the United States in our court system. Panelists: Hon. Louise Knight, Senior Judge, Pennsylvania Court of Common Pleas; Fred Martin, Esquire, former Assistant U.S. Attorney for the Middle District of Pennsylvania; Mary Beth Clark, Esq., Litigator and League of Women Voters of Lewisburg Area Board Member.

League of Women Voters ® of the Lewisburg Area