The LWV of Delaware is active in Dover, the state capital, working primarily through our 16 volunteer, registered lobbyists and other members of the Advocacy Corps who support our advocacy work in many ways.

The Advocacy Corps (AC), chaired by Linda Barnett, is comprised of our 16 volunteer registered lobbyists, other portfolio (committee) chairs, and additional League members who participate on a regular basis in the AC's deliberations and support the work of the lobbyists by researching, writing testimony, letters to the editor, op eds. The AC monitors all bills related to League issues.

Our volunteer lobbyists advocate on those bills where we have a relevant state or national position that has been developed after study and consensus at the national and/or state level.

A summary of our state positions, are  developed after study and consensus. Positions developed by LWVUS can also be used as a basis for League action.

The AC is also responsible for organizing our annual League Day in Dover, held in late March or early April each year.

The Corps meets in Dover monthly during legislative sessions and most months in between. For more information contact Linda Barnett, Advocacy Chair.

The LWVDE Advocacy Corps meets monthly in Dover. Preparing for advocacy at the state level takes place year round. When the first half of the 150th General Assembly ended June 30, we began thinking about the second half. Our top priority legislation for 2019 was Early Voting and it was enacted, with several League members present for the signing by Governor Carney on June 30, 2019.

In the first portion of the 150th Session (January through June 2019), the House and Senate introduced a total of over 500 bills, Substitute bills, and numerous resolutions. Our Advocacy Corps reviewed those covered by our policy agenda and agreed to support, oppose or monitor 128 of them.

We spent the summer months reviewing our successes and disappointments, probing in depth into the issues around bills we supported that did not pass, and looking toward new areas of concern. We spent a lot of time planning the focus for League Day in Dover 2020, to be held on March 26 at the Dover Downs Hotel, and pinpointing appropriate speakers. Our topic is “Financing the Needs of the State: A Look to the Future.”

In the Fall, we testified at several budget hearings held by the Governor's Office of Management and Budget (OMB). At these public hearings, state agencies present their budget requests for the upcoming fiscal year budget (July 1, 2020 - June 30, 2021).

Once the Governor's Recommended Budget was unveiled to the General Assembly and the public, we prepared testimony to present at Joint Finance Committee (JFC) hearings on the budgets proposed for various state agencies and to the Capital Improvement Committee, typically called the Bond Bill Committee, regarding proposed capital expenditures.

We are always looking for additional volunteers to work with us, to study issues, prepare position papers, letters to the editor, op eds, etc. And we hope YOU will TAKE ACTION whenever we send an Action Alert on important bills!

Click on one of the icons below to read our specific Position Papers and Testimonies on individual bills. 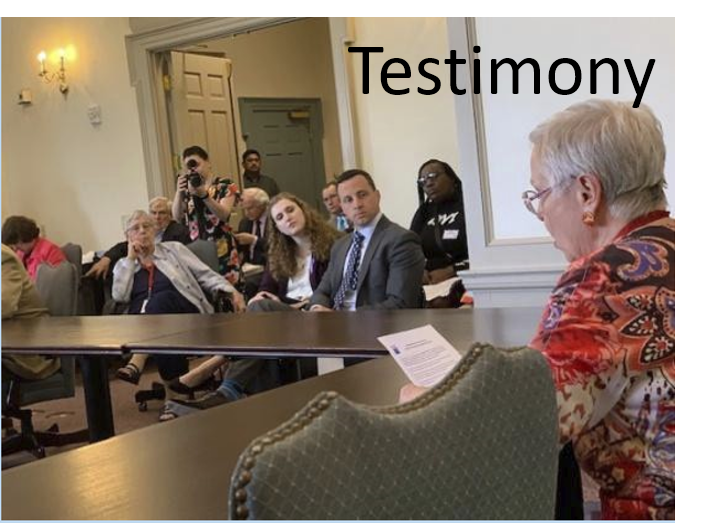 To learn about the priority national issues with which LWVUS is involved, go to LWV-Our Work.

If you would like to advocate on LWVUS positions at the national level, consider joining the LWVUS Grassroots Lobby Corps to receive email action alerts from the LWVUS and respond by sending quick, targeted, and sometimes last-minute, messages to members of Congress on priority issues before key votes. To get involved in this network, go to the League's website here. Provide your contact information and check Grassroots Lobby Corps.

The LWVDE produced The Lobby Handbook as a guide on how to conduct effective advocacy. An updated version (April 2018) can be found here It was written to give you a short course on the legislative process in Delaware and to offer practical information about influencing it. We encourage you to take advantage of our state's "uniqueness" and to become knowledgeable about and involved in your government.