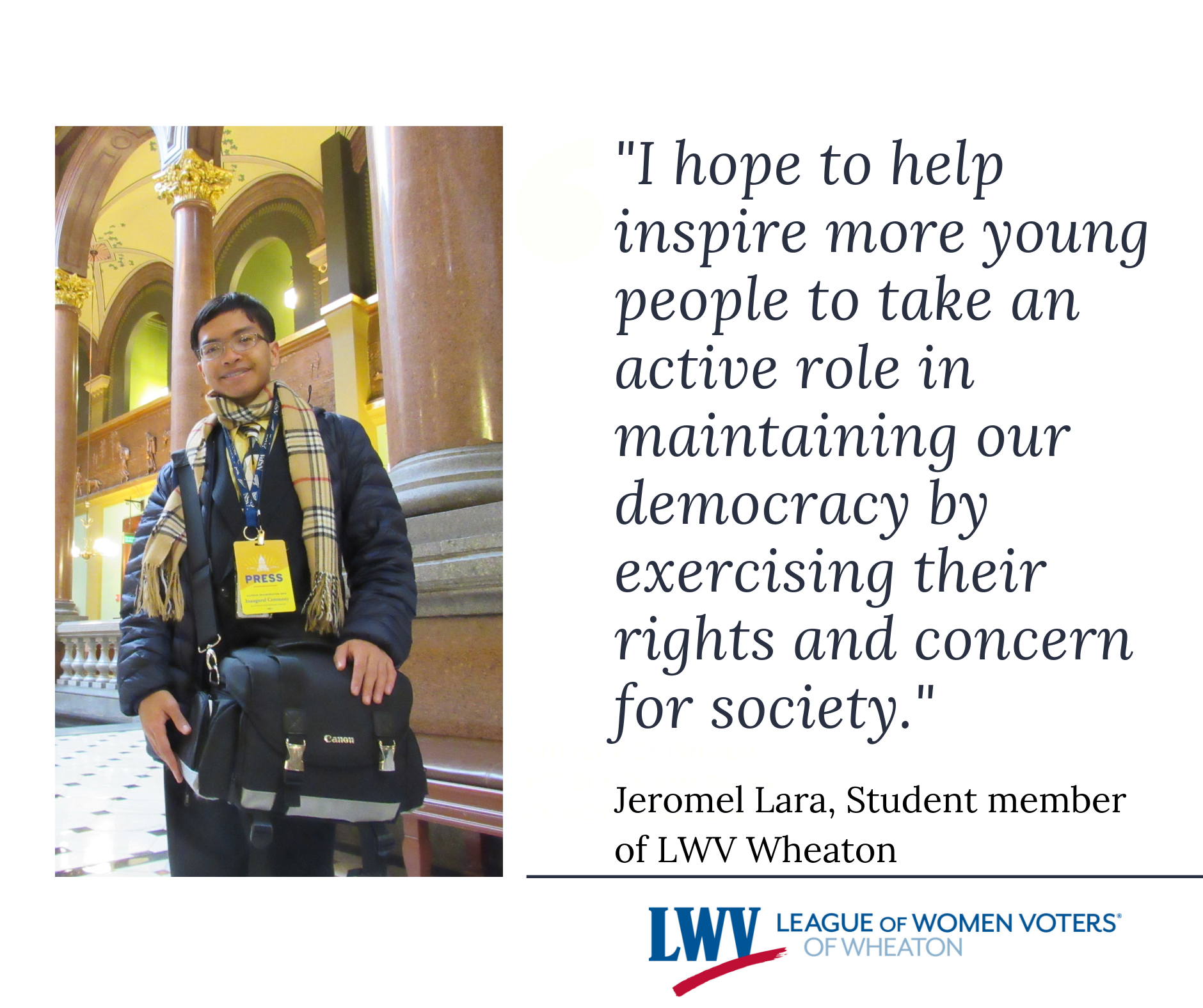 We’re so excited to welcome a new student member to our League this summer. Learn more about Jeromel Lara in this quick interview with our Communications Director, Mary Pritchard. Then read his reflections on an immigrant's civic engagement.

Welcome to the League, Jeromel! We’re so happy to have you as a student member this summer before you head off to college. Can you tell us a little bit about yourself?

Hello! My name is Jeromel Lara. I graduated from Glenbard North High School this year, and I will be heading to Harvard in the fall pursuing a concentration in government and history.

Government, history, and the social studies in general are my passions because of my life experience. I lived in the Philippines for 11 years and have seen the factors that contribute to the demise of democracy, poverty, and the lack of social change. As an immigrant to the United States, I have also seen the factors that make for a thriving democracy, economic growth, and societal progress.

What kinds of activities were you involved in at Glenbard North?

Much of the activities I did during high school correlate within these fields that I want to study. For 4 years, I have been a part of our school newspaper the North Current. As its features editor, I have made it a standard of our school publication to cover local politics and to hold officials accountable from school board members, our village's mayor, the Governor, and our federal representatives in Congress to name a few.

In addition, I have led the initiative as the assistant editor-in-chief and the first archivist to digitize all the newspapers we published since GBN first opened in 1968 (tinyurl.com/ncdigitalarchive).

I was also the captain of our school's varsity scholastic bowl team majoring in the areas of history, religion, geography, art, and social science (economists, psychologists, anthropologists...). In addition, I was an extemporaneous speaker in our speech team program where I get to discuss politics on the fly.

How did you find out about the League of Women Voters, and what made you want to get involved?

All these major clubs, in addition to my classes, other volunteer groups, and honor societies, influenced my participation in Civics Club where I got to promote civic engagement to our students. We hosted the Sixth Congressional District Democratic Candidates Primary Forum in 2017, led a walkout to protest against gun violence and mass shootings, held mock elections with the League of Women Voters, became election judges for the elections, took part in a Mikva Challenge discussion with J.B. Pritzker when he was still running for office, and so many more.

What do you hope to accomplish this summer as a League student member?

As I head off to college, I look forward to enhancing my knowledge, experience, and contribution in civic action. I hope to help inspire more young people, especially those who may not be pursuing a career in the realm of politics, to take an active role in maintaining our democracy by exercising their rights and concern for society. I am so thankful for the League of Women Voters for all your work in engaging us young people to be civically active.