The League of Women Voters of Wheaton and Cantigny Park have been presenting a Civics Awareness program since 2017. We’ve had over 700 attendees at our programs that covered a variety of topics such as Campaign Finance, ERA, Fake News, Immigration, and issues before the Supreme Court. They’ve been held at the Cantigny Park Visitors Center and the McCormick mansion. Videos are available for some of the presentations on the Civic Awareness Page.

Because of the corona virus pandemic, programs at Cantigny have been canceled.  In the meantime, you can watch videos on current constitutional and civics issues by Steven D. Schwinn, Professor of Law, University of Illinois Chicago John Marshall Law School. He presented again on June 18, 2020 on Zoom. 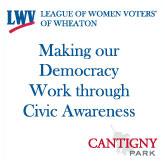 Submitted by Wheaton, Illinois in August 2020.