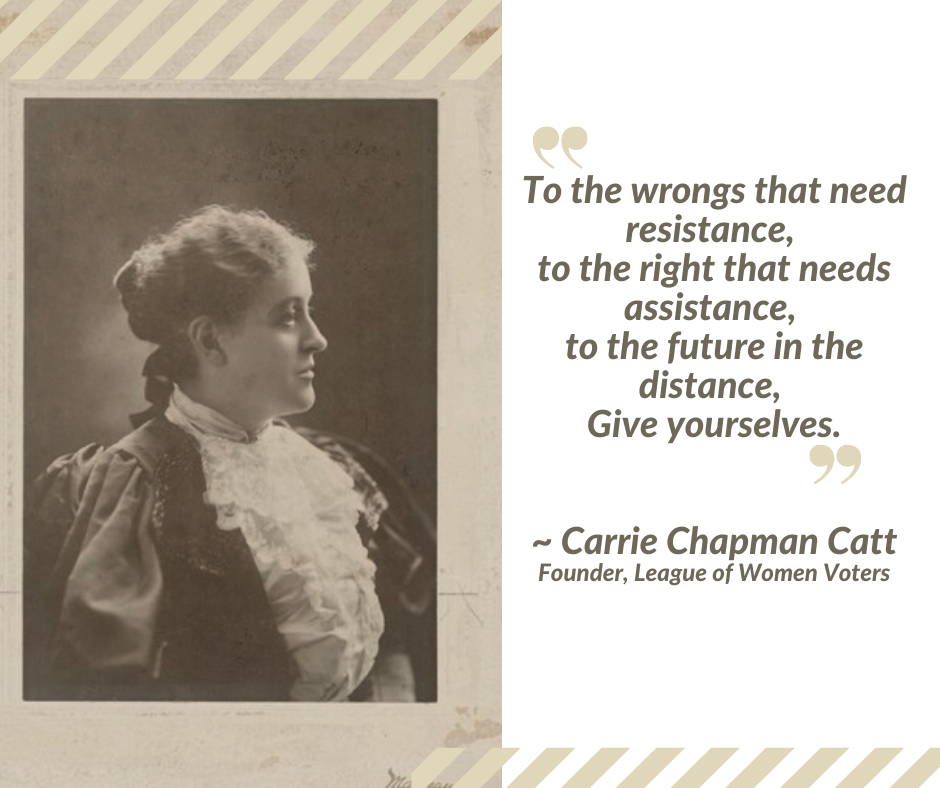 The League of Women Voters is Turning 100!

In 2020 the League of Women Voters (LWV) will celebrate its 100th anniversary and the LWVNC joins more than 700 other local and state chapters to celebrate this historic milestone.

As we look to a vibrant future on the threshold of our next 100 years, the League is excited that dedicated members across North Carolina continue to steadily attract significant numbers of activists who share the League’s commitment to Making Democracy Work.

The League of Women Voters president, Chris Carson, issued the following statement regarding the League’s efforts ahead:

Today we are faced with many challenges that threaten to compromise our democracy. Our efforts to support voting rights and to fight against voter suppression and discrimination at the local, state and national levels have been very successful, and this has been achieved primarily by educating and empowering voters, circulating special petitions, and intervening in several critical court cases.

The League’s historic commitment to register, educate and mobilize voters is not only stronger, but more effective than ever, utilizing such tools as VOTE411.org—a cutting-edge election information website utilized by millions of voters each election cycle.

Jo Nicholas, President of the LWV North Carolina, had this to say about the state League's work to come:

We will continue to fight voter discrimination and to keep secret money out of our elections to ensure that our elections are fair, free and accessible. We’ll also continue to push for improved access to housing as well as recognizing that Climate Change is a scientific reality that must be addressed to ensure a sustainable planet for everyone.

Although women of color have always made lasting contributions to women's suffrage and the women's movements, their work has been marginalized throughout the organization's history. "The Untold Story of Women of Color in the League of Women Voters" – written by Dr. Carolyn Jefferson-Jenkins, a North Carolina resident and former national president of LWV – adds a new dimension to the conversation. We encourage you to read this book as well as the titles on the resource list below.