Call to Action on Bills before the State Senate, October 8 2019

Call to Action on Bills before the State Senate, October 8 2019 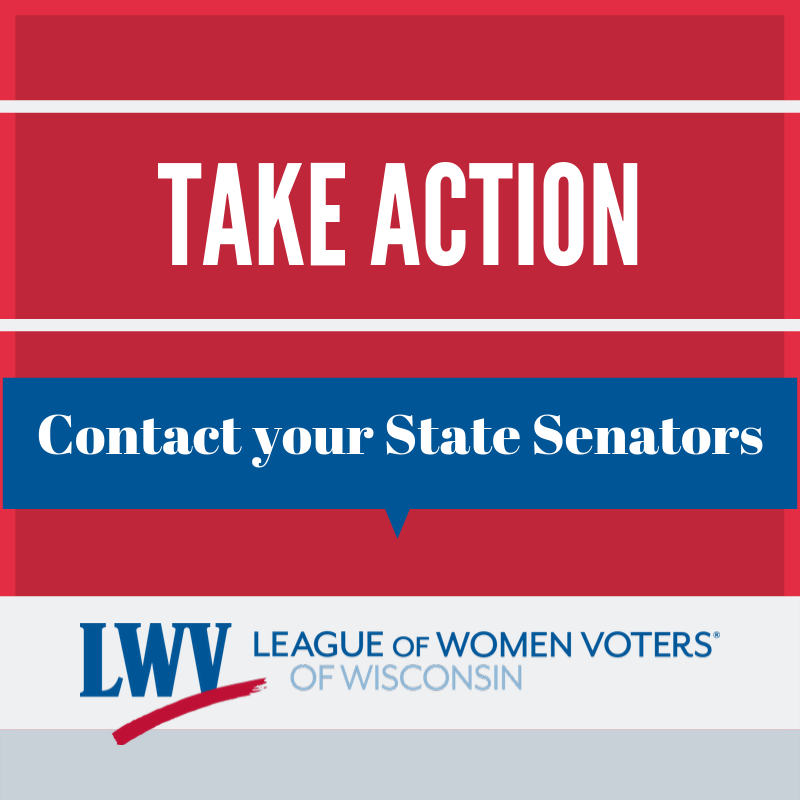 The State Senate will vote Tuesday on two bills supported by the League and one that we oppose. The Senate Calendar for Tuesday, October 8, 2019 includes:

AB 168, which would allow voters who are unable to state their name and address due to a physical disability to present their ID to the election official to be verified. Then either the election official or a person helping the voter may state the voter’s name out loud for the benefit of observers. This bipartisan legislation allows voters with certain disabilities to exercise their right to vote, while preserving transparency of our elections. AB 168 has been passed by the Assembly. If the Senate passes it, this sensible bill will go to Governor Evers to be signed into law. Tell your State Senator to vote YES on AB 168.

AB 52 is a bipartisan bill that would allow 17-year-olds who are homeless and do not have a parent or guardian to contract for admission to a shelter or transitional living program. This opportunity for shelter will stabilize the lives of homeless juveniles and enhance the ability of a young person to finish school. AB 52 has been passed by the Assembly, and it deserves support in the Senate. Tell your State Senator to vote YES on AB 52.

SB 169 is a complex bill that does not deliver the wetland protection that it promises. The legislation correctly ensures that mitigation of wetland disturbance is undertaken as near to the impacted wetland as possible, and it establishes financial assurance requirements for construction of mitigation projects. Although the League supports these goals, we find that this bill does not encourage the intergovernmental coordination that is needed needed for such projects, nor does it tie mitigation credits to actual progress. Early release of credits without adequate progress would “cheapen” the value of mitigation credits. Although this bill enjoys limited support from industry groups, we believe the legislation would do more harm than good. Tell your State Senator to vote NO on SB 169.

Contact your State Senator now if you agree with the League on any of these bills. You can find your Senator by typing your address into the “Who Are My Legislators?” field on the state legislature’s home page or by calling the Legislative Hotline. In Madison, dial 266-9960. Toll-free, call 1-800-362-9472.