June 23, 2019 event commemorates Wisconsin’s 100th Anniversary to be the First to Ratify the 19th Amendment

June 23, 2019 event commemorates Wisconsin’s 100th Anniversary to be the First to Ratify the 19th Amendment 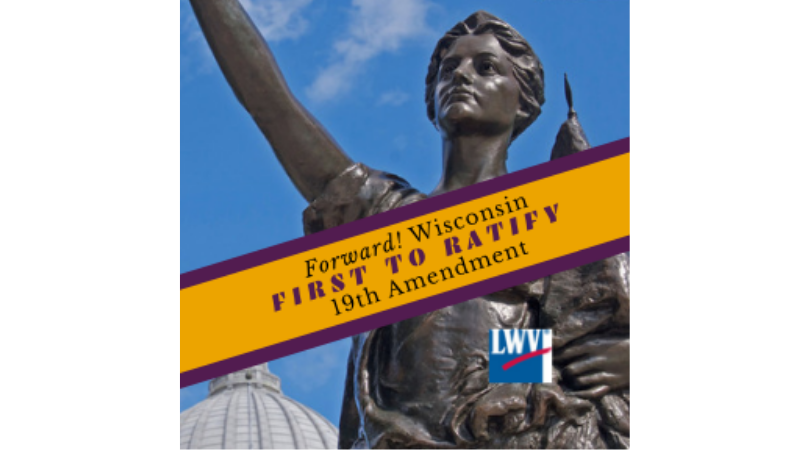 The League of Women Voters commemorates Wisconsin’s 100th Anniversary to be the First to Ratify the 19th Amendment with June 23, 2019 event

"The League of Women Voters of Wisconsin champions Wisconsin's first-to-ratify vote in support of women's suffrage 100 years ago,” says LWVWI President Debra Cronmiller. “We're proud of the League's role in that achievement and our past 100 years in service to Wisconsin voters. Today is no different. The League continues to work in defense of democracy, advocating for every eligible Wisconsin citizen's right to vote, free of undue barriers and discrimination."

Immediately following the program, the gathered crowd will march around Capitol Square, led in song by the Raging Grannies. League members will be on hand to assist the public with voter registration. Families and friends can make a suffrage sash, enjoy free frozen vanilla custard, take a photo in the Forward statue pose, and view the Wisconsin Historical Society exhibit, The Woman’s Hour Has Struck, Wisconsin: The First State to Ratify the 19th Amendment, now on display in the Capitol.

LWVWI planning committee member Ellen Penwell shares, “The event draws on the spirit of the state's motto ‘Forward’ to highlight how Wisconsin led by example, being the first state to ratify the proposed 19th Amendment. That prompt action in support of votes for women is our proud heritage and worthy of a celebration. I encourage those who attend to wear white in honor of the suffragists."

Now more than ever, women’s rights are at the forefront of national dialogue. In Wisconsin, the League of Women Voters state office and local chapters advocate for informed and active participation in government, working to improve our systems of government and impact public policies through education and advocacy.

On site interviews will be available with League leadership, members, and supporters.

Contact the state office for day of event media contacts.

The League of Women Voters of Wisconsin is a nonpartisan political organization that advocates for informed and active participation in government. There are 20 local Leagues throughout Wisconsin. More information at lwvwi.org.