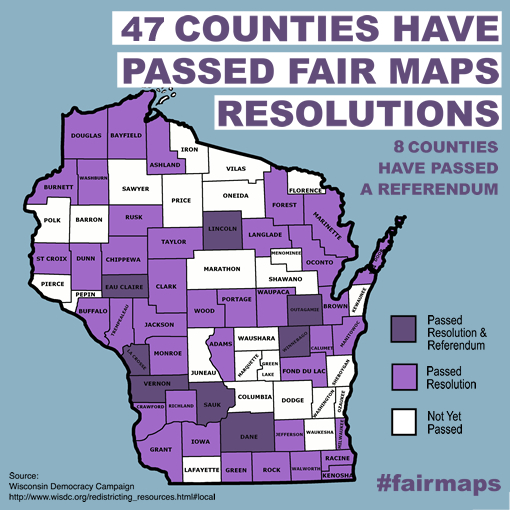 On July 16, 2019, good government groups, the press, and concerned citizens from across the state filled the Assembly parlor room to capacity. The purpose of the gathering was to bring attention to the current legislation and need for redistricting reform in Wisconsin. Erin Grunze, LWVWI executive director, was there to deliver a statement on the importance of the nonpartisan redistricting bills SB 288 and AB 303. You can read Grunze's remarks below. You can see full coverage of the event from WisconsinEye here.

"The League of Women Voters of Wisconsin has advocated for nonpartisan redistricting for decades. Over these decades, the control of the legislature has teetered between the two major parties. The response from the party in power has always been to accuse the League of siding with the minority party and that the League is looking to push that party’s agenda. The League has been accused of siding with Republicans and then siding with Democrats.

But in fact the League has always been looking out for the voters in our advocacy. The voters who are packed together or cracked apart because of gerrymandering. It’s a problem with power, and when those in power can determine how they keep their power, we no longer have a representative democracy. Republican voters are cheated when Democratic politicians gerrymander like in Maryland. Democratic voters are cheated when Republican politicians gerrymander like in Wisconsin. No party is innocent.

Gerrymandering isn’t a problem of one party. It’s the partisan cling to power that damages the will of the voters’ and erodes our democracy. Voters should pick their elected officials, not the other way around. With our current system in Wisconsin, politicians draw their own district lines to pick their voters and to lock in their own political power.

Yet, there is a solution.

We have bills, introduced by Rep Vining and Sen Hansen, that can make this process more open, more representative, and more transparent by taking the redistricting process from the partisans and moving it to an independent and nonpartisan Redistricting Advisory Commission. There is bi-partisan support because this is a solution that is right for democracy. Wisconsin voters across the political spectrum want to see this change.

And now is the time the nonpartisan redistricting bills SB 288 and AB 303 get a public hearing and deserve serious consideration by lawmakers in Wisconsin as we expect the representatives we elect to be held accountable to the public’s unified call for reforms. Elections should be determined by voters, not politicians who draw maps."