League in the Spotlight: LWV of Door County

League in the Spotlight: LWV of Door County 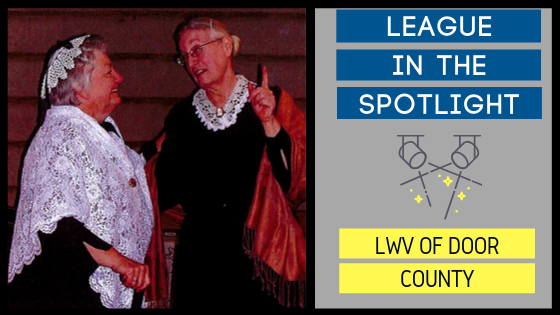 LWV DOOR COUNTY member Susan Kohout and local actor Chris Milton researched the lives of two famous founding women of the early women’s rights movement, Elizabeth Cady Stanton (1815-1902) and Susan B. Anthony (1820-1906). Their undertaking led to the creation of a theatrical performance, “Susan and Elizabeth: A Friendship of Consequence,” which they themselves perform. Over many months, Susan and Chris researched books, films, and other sources on Anthony and Stanton, finding common topics and themes among their letters and speeches. As their subjects became real to them, Susan and Chris determined that the best way to convey the humanity and sentiment driving their advocacy and lifelong friendship, was to concoct a later in life “cozy chat” between the two, as they reminisce about their fifty-year relationship fighting for women’s rights.

"Susan and Elizabeth: A Friendship of Consequence,” will be performed at the Ozaukee County Historical Society on October 12th, 11AM-2PM. Susan and Chris have already performed for several state Leagues, historical societies, Learning in Retirement groups, local schools, and in community theaters. If you would like to bring their performance to your community, please contact Susan Kohout at rrkohout [at] gmail.com or Chris Milton at summerplace1984 [at] gmail.com. Sharing this labor of love expresses their own commitment to the cause and they hope it awakens the same in others.