We know that COVID-19 will still be a significant problem in November. Voters should not have to choose between their health and their vote, and voting should be easily accessible to all registered voters. The League of Women Voters of South Carolina is enlisting its members as well as citizens statewide in a campaign to ensure that the elections will be safe and accessible, both by mail and in person.

All members and other citizens throughout the state will be needed to help in this work! 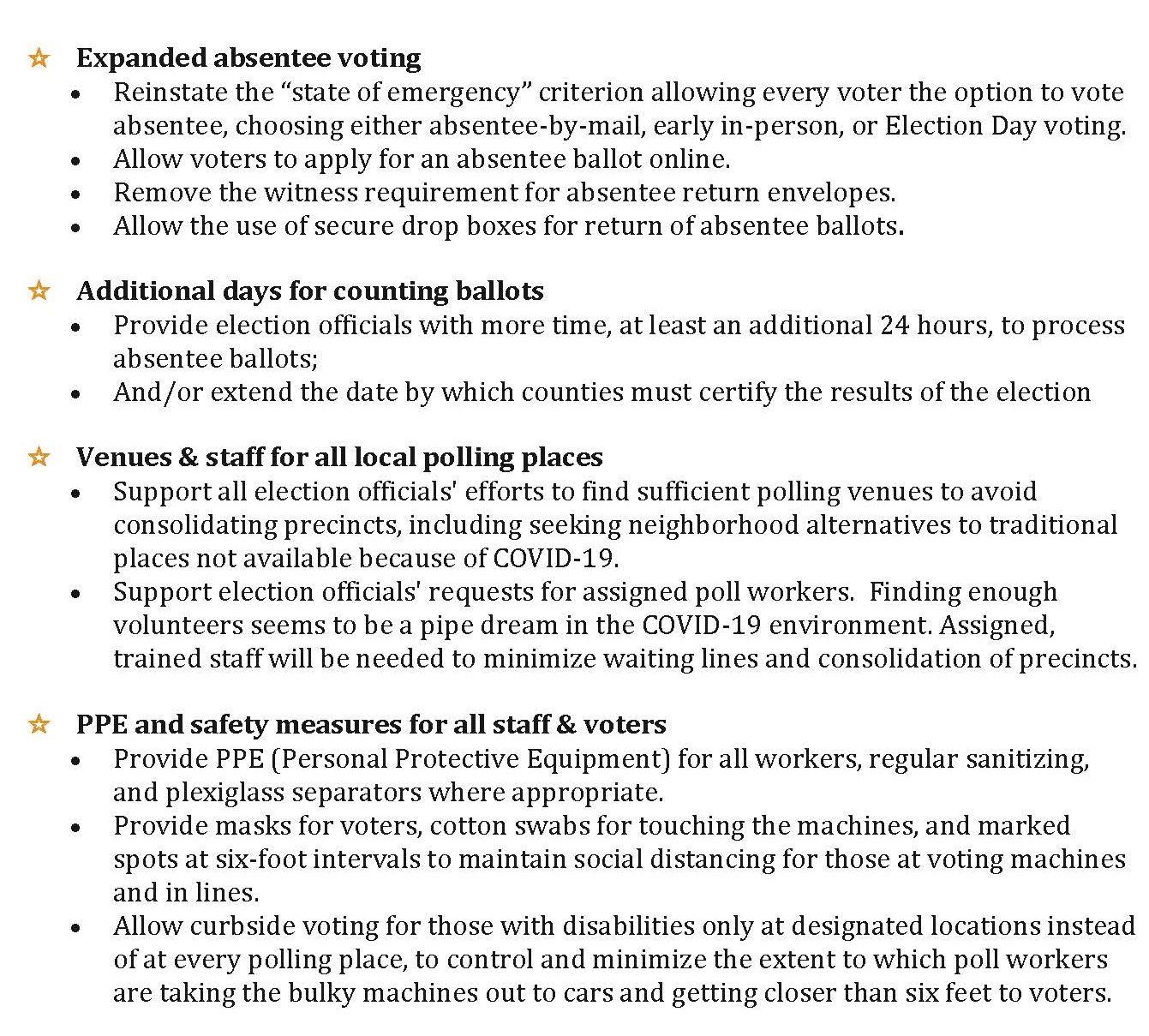 On August 3, an Action Alert was sent, asking all to write to their state Representatives, Senators, and the Governor by snail mail (since they will not be in session in Columbia), advocating for these changes that are so urgently needed.

Our tactics for achieving safe elections

Aug. 17 Op-ed by Lynn Teague, VP for Issues and Action

"It's time to give every South Carolina voter the chance to vote safely by mail." LWVSC op-ed in The State, May 7, 2020

Update on Elections and Pandemic 5/3/20

S.C. Needs to Protect the Health of Voters in Upcoming Elections, Letter to the Editor, Post & Courier, 4/23/20.

Voting in the Pandemic: We Need Action", article and call to action in Women's Rights & Empowerment Network (WREN) Blog, 4//20/20.

Protect S.C .Elections During the Pandemic, published 4/3/20 in The Statehouse Report.

LWVSC supports ensuring that elections result in fair and transparent outcomes by:

2.  Retain the State Election Commission as an independent non-partisan agency.

5.  Providing for proper conduct of elections through:

a.  Instituting authority to poll watch for an issue.

b.  Mandatory training and adequate remuneration for poll workers.

6.  Moving the primary date closer to date of general election.

7.  Using the primary method of nomination for all certified state, county and national candidates with state and counties administering and bearing cost of all such primaries.

8.  Extend the 50%-plus 1 rule to all state and local primaries and general elections for single seats.

9.  Adopting election systems that ensure better proportional representation of the varied segments of our voting population, within South Carolina, by city, county or statewide, as appropriate in order to achieve better election and/or influence for minorities and women in proportion to their numbers in the population, reduce in election costs, in part by eliminating costly runoff elections, lessen polarization among segments of the population, increase voter turnout and provide more opportunity for third party candidates.

10.  Encouraging and supporting local communities to develop their own election system for local elections, after careful examination of the demography of its community. Systems which may be considered include Instant Runoff Voting (IRV), Limited Voting, Cumulative Voting, more use of at-large seats, and others. An explanation of the method used must be provided.

11.  Implementing automated systems of voting from a statewide list approved by the S.C. State Elections Commission to standardize voting procedures, lessen voter confusion, increase the accuracy of the count, and ensure that all provisional ballots cast by voters lacking Help America Vote Act-required ID are counted by using any of the HAVA provisos

12.  Protecting the integrity of the electoral process in the way elections are conducted by:

a.  Purchasing only voting systems that include a paper ballot.  Acceptable machines must ensure protection of privacy, allow the voter to verify his/her vote, and provide a reliable basis for a recount if required.

b.  Mandatory random testing of voting systems during every election.

c.  Requiring that source code of voting systems be open for inspection.

13.  Independently verifying the results of all federal elections and elections of statewide         officials before results are certified.

14.  Continuing the practice of open primaries in which any registered voter may participate in the primary of either party.

A study of alternative election systems was passed at the LWVSC 2003 convention and the number 11 support position was adopted by the state board at its March 2005 meeting. In 2007, with completion of a two-year study of electronic voting in SC, Section 9.f. was amended and Section 12 was added. In 2015 number 2 was amended to refer to an “independent” rather than a “bipartisan” commission. In 2017 the Electoral Democracy section was reorganized to group positions under appropriate subheads and position 18 was clarified. Number 10 was added to support rules for classifying voters as inactive. In 2019, the convention approved a concurrence with a Florida League position supporting open primaries.

We thank our legislators, but we also thank all LWV members and other South Carolinians who have joined LWVSC's vigorous campaign to help safeguard our elections during the pandemic! There is no doubt that the outpouring of letters mailed to legislators while they were at home, urging action, played a role in bringing about this result. We are delighted beyond measure that the General Assembly took action today, extending the opportunity to vote absentee by mail or in person to all for the June primary -- and also delighted by your responsiveness to our campaign and by your actions!

500,000 Americans Could Struggle to Get Voter ID

A new Brennan Center report, (July 18, 2012) The Challenge of Obtaining Voter Identification, shows the potential effects of restrictive voter ID laws in 10 states. These states require voters show some form of government-issued ID at the polls. Yet some voters, often poor, minority and living in rural areas, do not have this ID (including a driver's license), and must secure one from a state ID-issuing office. The Brennan Center found that about 500,000 eligible voters live in households without a car and live more than ten miles from a state ID-issuing office that is open more than two days a week. In Texas, for example, in 32 counties near the Mexico border, there are 80,000 eligible Hispanic voters, but only two ID-issuing offices open more than two days a week. Perhaps even worse is the underlying documentation these citizens must produce to procure photo ID. To prove identity, eligible voters may have to show official copies of both their birth certificate and marriage license. The total cost for these records could be as much as $30. The report undercuts claims by voter ID supporters that photo ID is not burdensome. The reality is that, for some eligible Americans, voting is no longer a right of citizenship, but a fee-based privilege. See more at the Washington Post, NPR, Reuters, USA Today, and CBS News.

Voter Photo ID in the Media